When we first heard about "micro mesh" for sanding polymer clay, we were somewhat curious about it.  After researching it out we discovered it came in cloths as well as "pads".  We decided to finally give them a try and see if they really made that much difference.  We ordered the pads as they were  reasonably priced and available in Canada.

They are rather small (2" x 2") but are double-sided and surprisingly last much longer than you would think.  We like how the grit number is printed on them which makes it easier to keep track of using the same side until it is worn out and then using the opposite afterwards.  They come in a wide range of grits (above photo) but really isn't necessary to use them all with the polymer clay.  After testing them out we decided to use these three grits:  1500, 2400 and 3600. 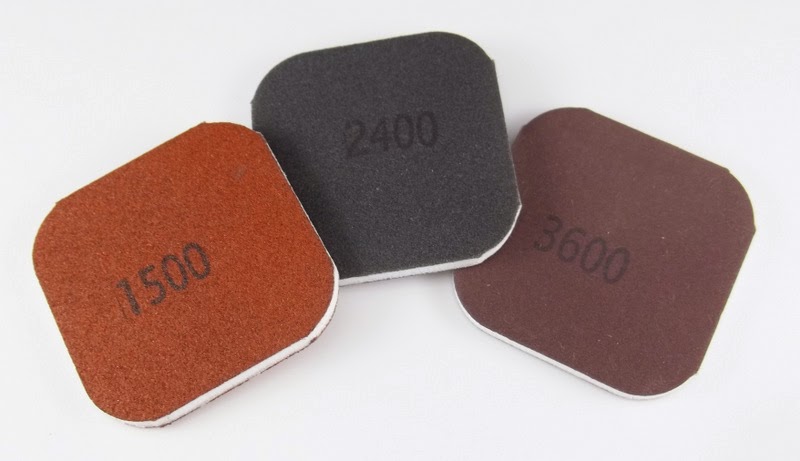 I should mention that the micro mesh does not replace the normal wet/dry sandpaper.  We use the micro mesh as an extra sanding addition and only for those items that we want to have a super smooth finish and a high shine.

Our kitchen sink is our sanding work area.  We like to fill both sinks with warm soapy water. 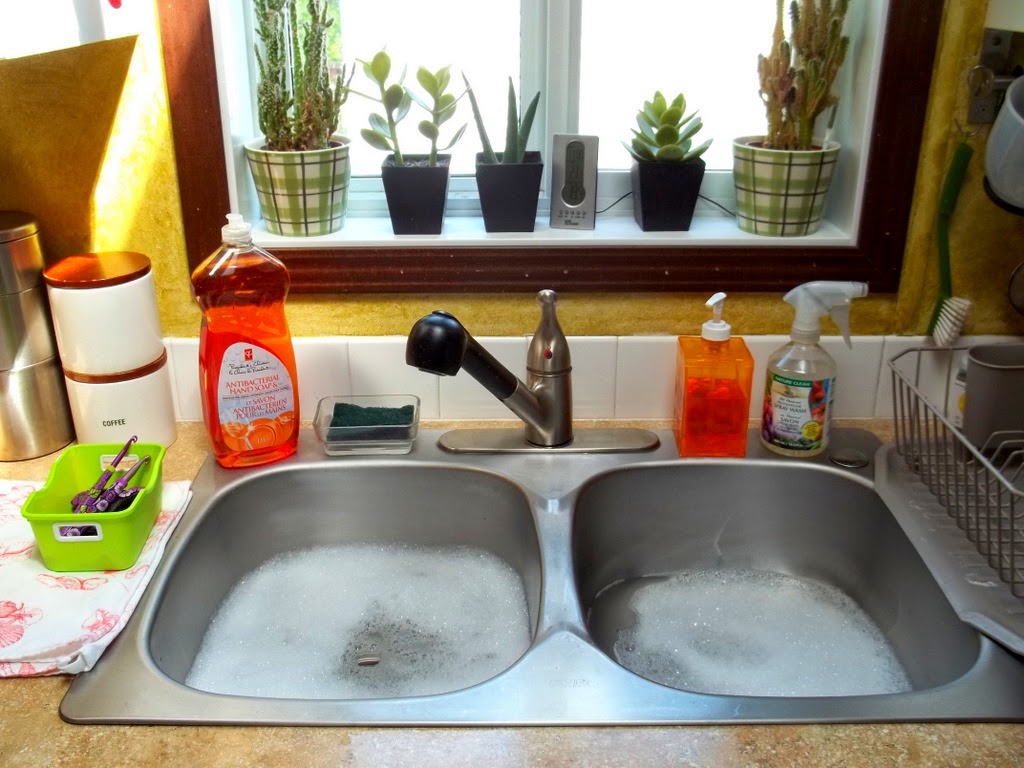 We let the sanding paper soak in the water for a few minutes to soften a bit so they are easier to work with, especially if they are new and hadn't been used yet. 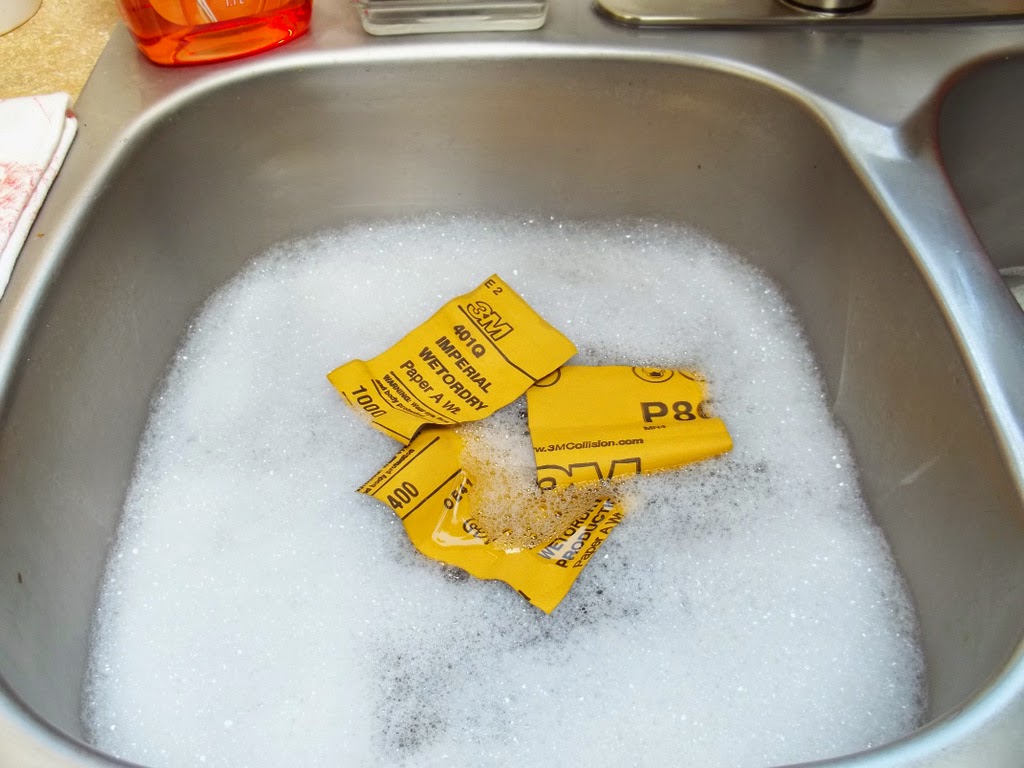 We generally like to start with a 400 grit sandpaper but if there are any rough spots or edges that need smoothing we will do that first with the 320.  Holding the polymer object in one hand and cradling the sandpaper in the other, rub the piece back and forth on the sandpaper.  Once the piece feels fairly smooth, we then sand again with the 800 grit sandpaper.  You always sand with a lower number first and then work up to a higher number which is a finer grit. 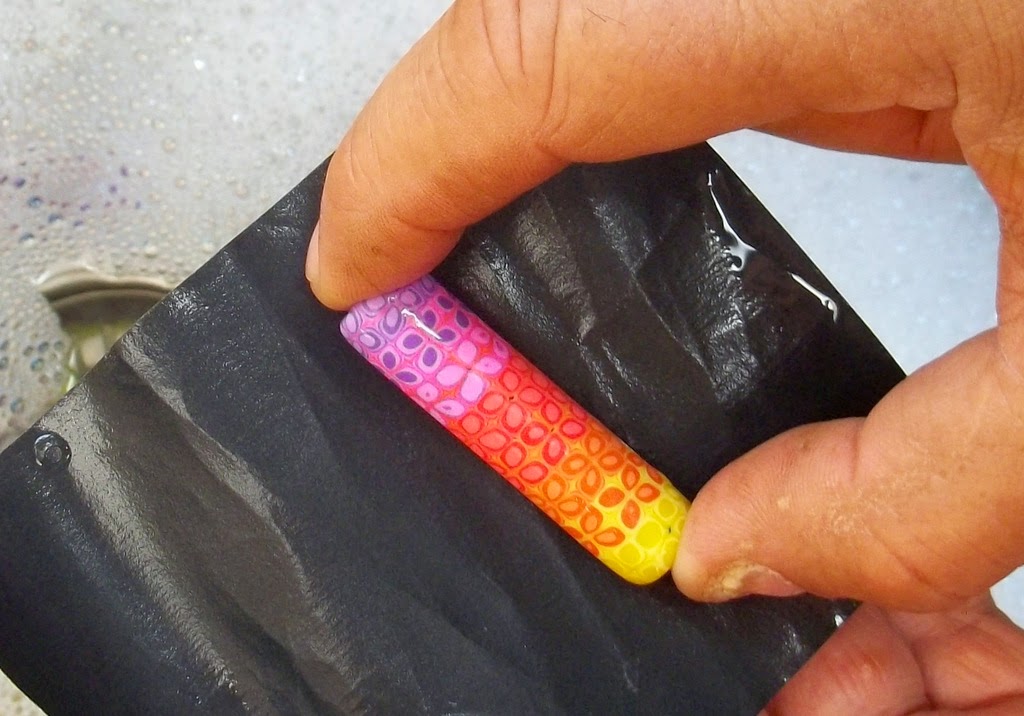 Normally one would carry on with higher grits of sandpaper such as 1000, 1500 and so on but this is where we instead switch over to the micro mesh.  The numbers run the same with the micro mesh as the sandpaper where the higher the number the finer the grit so we start with the 1500 and then sand with the 2400 following with the 3600.  Because the piece is already smooth from using the 800 grit sandpaper, it doesn't take much effort with the micro mesh.

After sanding, we then like to rub on some wax (Minwax or Renaissance) and buff with a soft cloth.  For items we want to give a super almost glass-like shine, we then buff with our dremel using our own handmade buffing pads.  You can read our buffing tips on buffing with a dremel in a previous blog post here.

I tried various ways of photographing it to show how glass like it was but was difficult to capture.  I tried capturing it in a video which shows it off a bit more.  The spots that you see are reflections off the light.