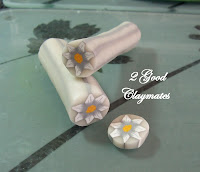 For some time now, Dave has been bugging me to do some flower designs. I was procrastinating mainly because it takes a bit of time just to make one flower cane just like the white one pictured here.

Well, I finally set a day aside and, that's right, did nothing all day but make flowers! Of course I had to make some leaves to go with them as well. So here are the fruits (or I should say flowers) of my labor and later I will post some photos of what I've been doing with those flowers. 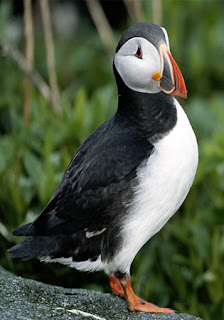 We have some friends from Newfoundland and many have told us stories about their province and what they liked the most about it. One of the things they told us about was their provincial bird, the Atlantic Puffin. Since we are from the opposite end of the country, we have never seen this bird before so I did some research on the internet and discovered as you can see from the photo that he is quite cute. I thought it would be fun to make something for our friends with a puffin bird on it and so decided to make a cane. It was a little more challenging than I thought it would be but I posted some photos of the process so you can see some of the work that went into it and the end results.

I started with creating the head: 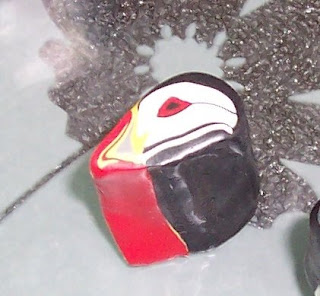 Then I formed the body and put the two together. 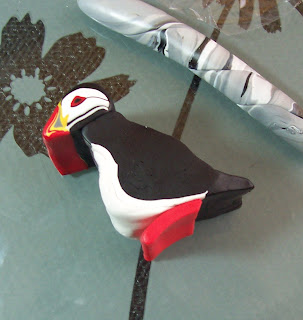 Now add the feet and some rocks for him to stand on....  and some blue for a background to help make reducing the cane a little easier. 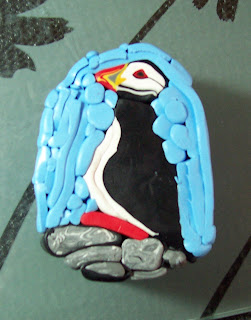 Wrap some black clay around for framing and begin to squeeze the cane to make it more compact and reduce the size. 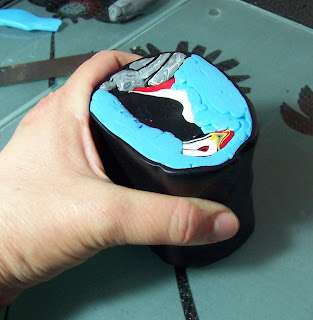 When it is half the size, cut in half and see the inside. 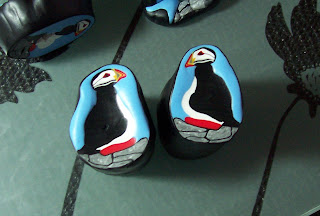 Reduce one of the halves to make the puffin smaller. 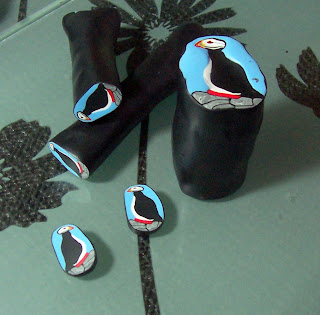 Now take some slices off the cane and make a pendant and matching earrings. 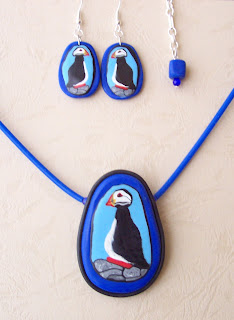 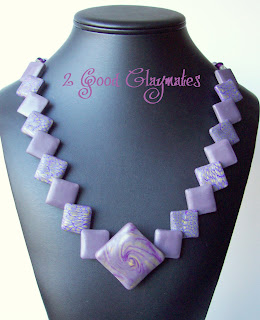 I once saw a beading project for a necklace made with "Kite" beads that totally fascinated me. The design of these beads is unusual where the hole enters on one corner and exits the opposite corner and opposite side. When they are strung, they overlap totally hiding the stringing material. I kept thinking about those beads and wondered if they could be formed out of polymer clay, so I thought I would give it a try. The above necklace was the first prototype we made and since we had one under our belts we thought we would try our hand at another. The one in the photo below was done in a mica shift and skinner blend of an olive green and golden yellow. 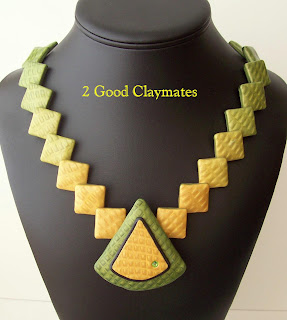 We plan to do more of these in a wider range of colors and designs.
Posted by 2 Good Claymates at 8:41 PM No comments:

A different type of jewellry box/cabinet

I posted some photos of a clay tile with flowers earlier on. I was making them for a different type of jewelry cabinet. It all started when I received a hanging wine rack shelf as a door prize at my work Christmas party. Since I had no use for what it was intended for, I started to think of what else I could do with it. I studied it for a while and then thought what if I had glass piece over top, I could then store and also see my accessories in the spaces where the wine bottles would normally rest. Maybe I could actually make some drawers to fit in those openings! This turned out to be the most challenging part, but once I made a cardboard form, everything then fell into place. I had a lot of scrap clay in my box so decided to combine and mix a lot of it up so that gave me a start in choosing some of the colors. Here are some photos of the process: 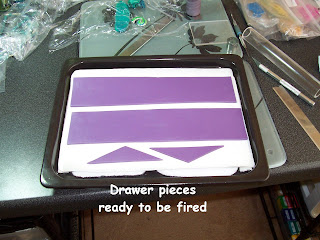 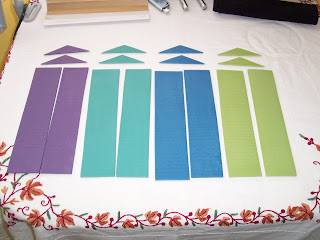 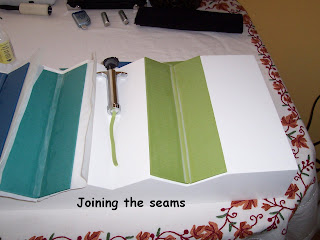 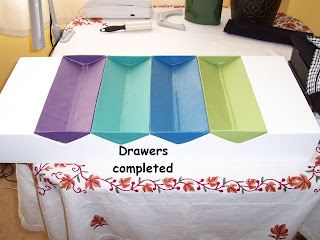 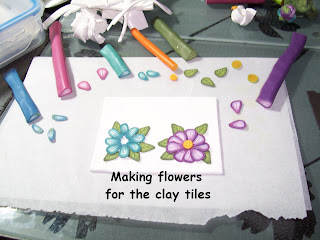 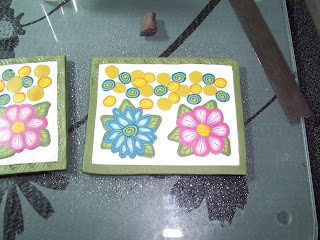 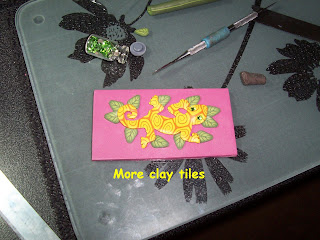 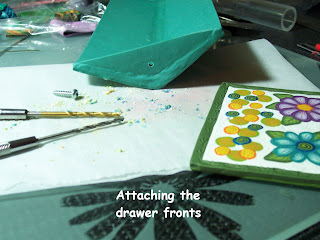 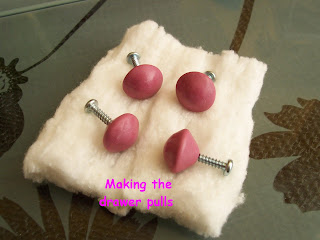 So here is the finished cabinet ready to add the glass and maybe mount on the wall. Kind of funky but a fun place to store some of my favorite jewelry pieces.

Posted by 2 Good Claymates at 9:13 PM No comments: