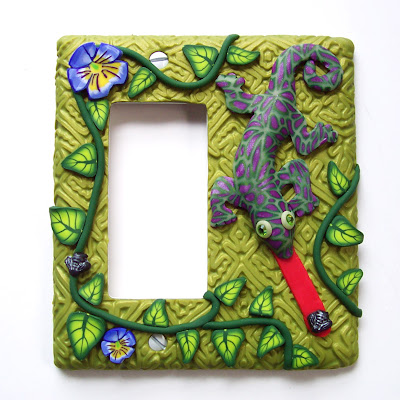 Our oldest grandson was visiting us this week and so between our swimming time in the lake we squeezed in some clay time.  When he was here last summer we made some things together for the first time.  You can see those here.  This time we decided to make a switchplate cover for his room with a gecko on it.  We made the lace cane for the gecko which turned out pretty good. The whitish outline part around the eyes and on his back glow in the dark.  I tried taking night photos of it glowing but I haven't figured out that setting on the camera yet.  Anyone have any tips?
He extruded some clay for the vines and picked out some flower and leaf canes from my boxes and sliced and positioned them where he wanted. The neatest part I like are the flies he made from a little mould I have and placed them on the gecko's tongue and vine!  Something I wouldn't have thought of doing and I like the sense of humor he is developing - takes after his grandfather! 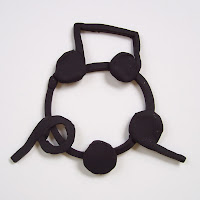 I also had him make a ball of clay and place slices from the cane ends on it and then showed him how to make a lentil swirl.  We were wondering what to do with it when we decided it would make a great glow in the dark fan pull for his room to match his switchplate cover.
He is really into music and has been playing the bass clarinet in the school band and originally wanted to make some musical notes from clay.  I happened to leave a comment on Angela's Crafty Goat's Notes Blog a while ago about some new clay she was trying out by Sculpey called The Bake Shop.  She was kind enough to send me a block of clay to try and it just happened to be black which was perfect for Adam to experiment and play around with.  He really liked it since he could condition it in his hands easy enough and he said it was nice and soft yet it didn't seem too sticky -- especially since our house was a little warm.  The muscial notes shown above was one of the pieces he made with it.  I can see where polymer clay and kids just seem to go hand in hand as our two grandsons love to play with it and it is one of the things they look forward to the most when they visit.  Maybe that is why I like it so much as I can feel like a kid again but still create adult type things!
Posted by 2 Good Claymates at 2:58 PM

I played the bass clarinet too when I was in school. One time when I was marching in a parade, the neck strap broke and I had to carry it tthe whol parade. Boy, were my arms sore after that!

I love the flies, too. Very cute!

I think it's great that you clay with your grandson -- clay's wonderful in that all ages can jump in and have a good time with it. And I'm so glad to hear he enjoyed the Bake Shop clay!